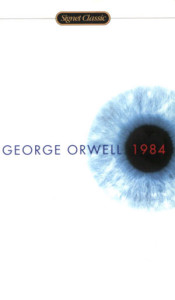 Written in 1948, 1984 was George Orwell’s chilling prophecy about the future. And while 1984 has come and gone, Orwell’s narrative is timelier than ever.

As literary political fiction and as dystopian science-fiction, Nineteen Eighty-Four is a classic novel in content, plot, and style. Many of its terms and concepts, such as Big Brother, doublethink, thoughtcrime, Newspeak, and memory hole, have entered everyday use since its publication in 1949. Moreover, Nineteen Eighty-Four popularized the adjective Orwellian, which describes official deception, secret surveillance, and manipulation of the past by a totalitarian or authoritarian state.¹