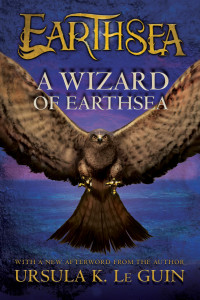 A WIZARD OF EARTHSEA by Ursula K. Le Guin

Waukesha Reads – The Big Read 2015 featured A Wizard of Earthsea by Ursula K. Le Guin. A Wizard of Earthsea is a classic coming-of-age novel and arguably the most widely admired American fantasy novel of the past fifty years. Originally published as a young-adult novel in 1968, Le Guin’s adventure tale is so imaginatively engaging and psychologically profound it captivates readers of all ages.

Ged was the greatest sorcerer in all Earthsea, but once he was called Sparrowhawk, a reckless youth, hungry for power and knowledge, who tampered with long-held secrets and loosed a terrible shadow upon the world. This is the tale of his testing, how he mastered the mighty words of power, tamed an ancient dragon, and crossed death’s threshold to restore the balance.

She influenced such Booker Prize winners and other writers as Salman Rushdie and David Mitchell – and notable science fiction and fantasy writers including Neil Gaiman and Iain Banks.[3] She has won the Hugo Award, Nebula Award, Locus Award, and World Fantasy Award, each more than once. In 2014, she was awarded the National Book Foundation Medal for Distinguished Contribution to American Letters. Le Guin has resided in Portland, Oregon, since 1959.

The Library of America recently published Le Guin’s The Complete Orsinia. From their website:

In a career spanning half a century, Ursula K. Le Guin has produced a body of work that testifies to her abiding faith in the power and art of words. She is perhaps best known for imagining future intergalactic worlds in brilliant books that challenge our ideas of what is natural and inevitable in human relations—and that celebrate courage, endurance, risk-taking, and above all, freedom in the face of the psychological and social forces that lead to authoritarianism and fanaticism. It is less well known that she first developed these themes in the richly imagined historical fiction collected in this volume, which inaugurates the Library of America edition of her works.

Writers were asked to create their own fictional masterpiece based on this year’s theme: It’s a Magical Life. Here’s the trick – it could only be 1,000 words or less! Read the winning entries in each division.

Runner Up: Juiced by Katie Herrmann

Runner Up: Witches and Killers by Shelby Parker

Winner: The Power of Music by Autumn Lee

Runner Up: A Magical Life by Lauren Elizabeth Fullerton