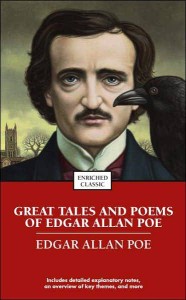 It’s time to say the obvious. No author stays internationally popular for 150 years by accident. Poe is one of the classic authors of American literature—a master of the short story, a magician of the short poem, and a critic of brilliance and originality. And no small part of his artistic sleight of hand is that he appeals to readers from childhood to old age. Let us underestimate him nevermore! (from the NEA Big Read website)

This selection of eleven stories and seven poems contains such famously chilling masterpieces of the storyteller’s art as “The Tell-tale Heart,” “The Fall of the House of Usher,” “The Cask of Amontillado,” and “The Pit and the Pendulum,” and such unforgettable poems as “The Raven,” “The Bells,” and “Annabel Lee.” Poe is widely credited with pioneering the detective story, represented here by “The Purloined Letter,” “The Mystery of Marie Roget,” and “The Murders in the Rue Morgue.”

Also included is his essay “The Philosophy of Composition,” in which he lays out his theory of how good writers write, describing how he constructed “The Raven” as an example.