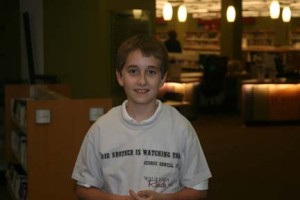 To See But Not Be Seen
By Tom Schellhase

“Where to hide, where to hide…” I run down Sunset Drive. Finally, I am able to stop and catch my breath. Then I see the UVD, the “unmanned video drone.” I have been running for so long that I almost can’t move, but as one of the cameras swivels my direction, I force myself to duck behind an abandoned Toyota Corolla. The UVD continues on down the street but I realize it was a horrible idea to go down this street. It would never be safe. I need a way to get out fast. I just wish I had a way to leave so fast that the UVD wouldn’t be able to react…

Just as I had hoped, the keys are still in the Corolla’s ignition. The car is stubborn after sitting idle for over 15 years, but starts eventually. The UVD turns in the direction that it “heard” the noise come from, but I am already around the corner, having shut off the engine so I am just coasting down the next street.

My name is Tom and I am 28 years old. In 2014, something called the Second Great Depression hit, and the Shoppe Brothers Co., currently the world’s largest corporation that owns everything in the U.S. from the Mall of America to the Pick n’ Save down the street, overthrew the government of the U.S. and took control of everything imaginable. Then Shoppe Brothers put up cameras everywhere, and put cameras, locator chips, and microphones in our cell phones. Anyone who tried to rebel was either put in prison, or even killed on sight. They treated us as slaves. In two years, our population was cut in half, and now, 15 years from The Overthrow (as we call it), I am still in one of the many feared underground rebel groups that try to make things difficult for “The Big Brothers.” That’s the nickname that Americans gave to the Shoppe brothers. I have just finished a mission to blow up a train carrying $14 million worth of gold that was being shipped to one of The Big Brothers’ banks.  As I said, we make life difficult for them. We live our normal crummy lives, but in our free time we carry out missions against The Big Bro’s. The one crucial thing about our guerrilla attacks is that we don’t get recognized. We need to see but not be seen.

When I get back to HQ, located on the site that used to be the Merrill Hills Country Club, I return the gold that I stole to the boss, head home, and call it a day. The next day, my mission is to blow up the checkpoint at the border of Waukesha and Milwaukee so that the truck full of our militia storm team can launch a full out assault on the Wisconsin branch of the Shoppe Brothers Co., and prepare for the assassination of The Big Brothers. As I travel north off of Sunset Drive, the patrol thugs keep giving me distrustful looks. I start to wonder if the UVD got a look at me before I spotted it.

After these unsettling thoughts, I try my best to blend into the large group of commuters. Once I’m in the city, I duck into the old Sprizzo’s Restaurant when I see one of the guards watching me. I run through the kitchen out back, but unfortunately, even in the dirty abandoned kitchen of an abandoned restaurant, there is still a camera in the corner. I run to the alley behind it and jump into the tall weeds.  The weeds cover me enough so I can’t be seen, so I pull out my brand-new phone, rip out the surveillance chip, and call in the modified Chevy Suburban (we’d taken the surveillance devices out) to my location. Five minutes later the maroon truck pulls up.  I watch as the driver gets out and walks away without noticing me. I run up and jump through the window and drive away as fast as I can. Just as planned, there is a fake uniform on the passenger seat.

“Nice jump.” I jump out of my skin, barely controlling the urge to start screaming bloody murder. I whirl around ready to confront the attacker, only to find Megan, our techy. I had forgoten that she would be on this mission with me.

“Yeesh Megan, you scared me to death!”

“Ha ha. Very funny. You want to get to work now?” Her job is to fuse the bomb. We are about three minutes away from the checkpoint and we pull over so I can change and so Megan can shove herself into a supply locker.  She puts the bomb in her lap. When we’re ready, we get back into the car and drive to the checkpoint…

Epilogue
On August 18, two “unknown individuals” blew up a checkpoint in between Milwaukee and Waukesha. Minutes later, thirteen various large semi trucks came through, according to witnesses, and didn’t stop until they came to the building of the Wisconsin HQ for the Shoppe Brothers. They launched a full-scale assault and overthrew it, taking all the weapons there with them.

Three days later, Jacob and Daniel Shoppe were killed in their mansion at five o’clock AM. This encouraged rebels all over the US to overthrow their states’ branches and soon all of the Shoppe Brothers Co. was gone, making way for previous political officials to form a new government, restoring order and removing almost all cameras from public buildings and streets.