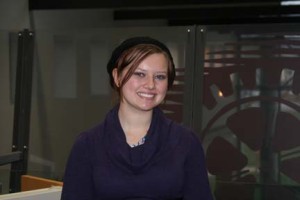 Nothing Else
By Laura Lyons

Maybe it was the weekend that drove me to madness. The Fates had brewed an elixir of bizarre, unforeseeable events, poured it into my water Friday morning, and poisoned me with ill fortune for the next three days. Now here I lay, stiff in my bed, unable to find the will to move. Tears dripped down my face and soaked my pores, making the already unbearable night damp. At my side lay a wooden cross, pressed into my hip, promising to shield any demon that dared to rattle me from my sleep. My father, who had long passed, gave it to me as a very small child after devils had entered my dreams and drenched my thoughts in terror. Father swore it would fight away the brutes that plagued my thoughts. Thus far, it certainly had.

I lay there, dosing off, the tips of my eye lashes seeming to want an affair with the bottom most part of my eyes. Then, like a blessing, I finally slept.

It must have been midnight when I felt a tugging at my hip. The hands of the person did not brush against me, but only grasped the wooden frame of the cross, attempting to remove it from my side. The light glowing from the hall way was made visible since whoever had entered my room had left the door ajar. Sleep was still fresh in my sight, making my vision blurred and distorted, but the person had the silhouette of my mother and the same blue-green eyes. Out of rage and annoyance, I yelled at her to leave my room.

She turned sharply so that her blue-green eyes were hidden from me. Her body was a dark shadow against the light, moving quickly, almost running. Then as soon as she was in the hall, she faced me once again. “I saw you needed me,” she said in a hushed, distant voice.

I screamed loud enough so that I’m sure Father could hear. ”Leave me alone!”

Slowly, the person began to close the door, only stopping so that a crack remained and a single blue-green eye could be seen.

But that pale blue-green eye never moved, its stare never faltered. It stayed there, peering at me intently.
“My God Mother! Let me sleep!”

This time, the door closed, that eye disappearing completely. I turned back to the side I had been laying on, put the wooden cross next to me, and fell back asleep.

The next morning I woke to my mother rapping at my bedroom door. I opened my eyes, dressed slowly, still drowsy, and made my way downstairs. I sat down at the spot my mother had laid out for me. The eggs she had set out were running, their dull, yellow insides bleeding out, soaking the whites.

“What were you doing in my room this morning?” I cut my egg up further until the entire contents leaked out.

She turned those stunning blue-green eyes to me. “I wasn’t in your room last night.”

Putting my fork down, I pushed my eggs aside. Egg whites drowning in yoke didn’t seem appealing to me anymore. “Yes you did,” I said hesitantly. “I saw you. I felt you.”

My mother now had a serious look on her face. “I wasn’t in your room.” But, just as suddenly as she had become stern, she laughed. “You must have had a dream, nothing else!”

An uneasy feeling drowned my insides. It wasn’t a dream. It couldn’t have been. I felt that cross move, it woke me.

That very night, I fell asleep just the same as I had the night before. There came again the tugging at my hip, my wooden cross moving.

“Get out!” I screamed at the woman with pale blue-green eyes.

Once again, the woman turned and made her way quickly to the door.”I saw you needed me,” she said and, just as she did the previous night, she closed the door until it was only open a crack wide enough for a blue-green eye to peer through.

This time, I sat up, fist so tight that the nails dug into my palms. “Who are you?”

“Who are you? What are you?” I was standing now, shouting.

My heart pounded in my chest, beating so fast that I was sure that it would hit a rib wrong and burst completely. I took a step to the door and screamed again. “Friend or foe! Tell me who you are, make yourself known!”

I took another step. The blue-green eye was still watching me, peering deep into my soul.

“Why are you here? Let me be!” This time I flung the door open, only to see a beast, so horrifying, so morbid. Her body was thin and obscure, her face melting off her bones with her piercing blue-green eyes the only thing intact. Her eyes were laughing, clawing into my spirit. I reached out with both hands, grabbing to wring her neck out, to kill this phantom haunting me, but all I caught was air. I fell forward and hit my head hard on the wall in front of me, causing blood to ooze down my face. Through the blood, I saw that wooden cross lying on the floor, scorched with a missing limb, and nothing else.