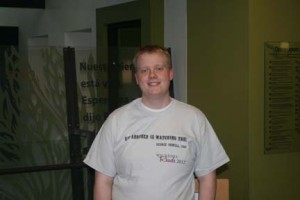 It was a brisk autumn afternoon, and while Jack Blanco strangled his wife with a length of old piano wire, he noticed a crow sitting on the balcony railing of his upscale fifth-floor apartment.  It peered at him while his wife gurgled and clawed at his gloved hands.  Her feet drummed on the floor, knocking over the side-table with a crystal brandy snifter.  It shattered, and Jack gave her an admonishing shake as the crow cawed.

Her gurgles faded, her purple tongue stuck bloody between her teeth, and she went limp.  Jack checked his gold watch and held his position for another sixty seconds.  He wondered what to have for dinner.  Italian?

She stayed limp, and only then did Jack release the garrote.  He tucked the wire into his coat pocket, went out on the balcony, and took the fire escape to the street just as the bus arrived.  There was a crow perched on the bumper.  Wearing a hat he’d never worn before, hands in his coat, he paid the fare and rode the bus sixteen blocks.  Yes, he decided.  Italian.

He got off the bus and went down the alley to his left, where a man snored around a bottle of whiskey every day from five until eight next to his barrel fire.  As he walked, Jack removed gloves, hat, and coat, tossing them into the barrel without breaking stride as three crows cawed at him from the eaves of the building above.

Jack walked three chilly blocks to the shabby motel where he had taken pains for the past three months to arrange a sordid affair with his secretary, Joanna, every Thursday night after he left work.  This Thursday, he had dissolved two tablets of eszopiclone – the usual medication his tryst took every night – in her wine glass.  She had been asleep for two hours now and would be for four more.

A half-dozen crows sat on the roof of the street-facing building as he let himself in with his key.  Joanna snored in the middle of the bed, still naked.  He stripped down, slipped in next to her, and changed his mind.  Not Italian.  They would go for French.

His horrified call to the police five hours later when he arrived back at home was a masterpiece, and the subsequent investigation went as he expected.  He was a prime suspect – there had been no way to avoid that – and the detective was convinced he was hiding something.  The revelation of his affair with Joanna (at which he acted ashamed and reluctant to reveal) placated the investigator after he could find no other evidence.

After three months he was no longer a suspect.  That day, he took Joanna to his favorite French restaurant.  A dozen crows wheeled about the place.  There, he admitted to loving her, thanking her for her support after the death of his wife.  She reciprocated, of course, and he continued eating.  The bisque was excellent.

They were married six months later.  The wedding was attended by all of his business associates, Joanna’s distasteful family, and a flock of black birds perched on cars and soaring overhead.

A year to the day after he had strangled his wife to death, Jack Blanco laid in bed next to the new Mrs. Blanco and let himself believe he had gotten away with it.  Everything had gone as planned.  Everything.

He’d ignored them but they hadn’t gone away.  They sat on his car every morning before he went in to work.  They perched on traffic lights at intersections.  They hopped on the window sill outside his office.

He bought a gun and shot one outside the suburban house he lived in with Joanna.  It fell like a sack of feather and he left its body to warn the others.  Joanna, six months pregnant, asked him what the noise had been.  He told her a car had backfired.

The next morning, the body was gone, and a legion of crows filled the front lawn in utter silence.  They formed a bubble for him to get to his car, closing back around him as he walked.

Jack mentioned the crows, exactly once, to his new secretary.  She’d looked at him, and then laughed nervously at a joke she didn’t understand from her boss.

Joanna gave birth to a little girl, and the crows appeared in house.  They watched him from doorjambs and the kitchen table.  They flapped inside cabinets while he poured coffee.  He opened the refrigerator one day and a flock of them poured out.

His co-workers started giving him strange looks, crows sitting on their shoulders.  Joanna asked him if he was well, often, his daughter in her arms and a crow on her head.  His boss suggested he take a sabbatical and spend it with his family.

Jack took a leave from work, but Joanna went to stay with her mother a few days later, lying about why she did so, leaving Jack alone with the crows in the house.  Raven black, they followed him everywhere.  They were silent, now, watching.

He opened his bedside drawer, and on top of his pistol there was a single crow feather, a piano wire wrapped around it.  Standing there, Jack Blanco started to laugh, and never stopped.

Joanna later told her friends, after Jack had been committed, that she thought he’d never really gotten over the death of his first wife.  Wearing diamonds on her fingers and gold in her hair his money had bought her, she sorrowfully recounted how his mind was broken and he’d never get out of the asylum.

When Jack Blanco died, ten years later, he was buried in the too-large cemetery behind the asylum.  As two orderlies in white covered his rough pine coffin with dirt, a crow perched on every tombstone.  The orderlies tamped the dirt flat, and the crows – a murder of crows – took flight.