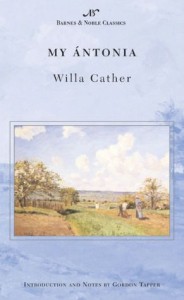 MY ÁNTONIA by Willa Cather

A beloved American classic, Willa Cather’s My Ántonia (1918) is best summarized by its epigraph-“the best days are the first to flee.” In it, the adult narrator, Jim Burden, remembers his childhood through the memory of his friend, Ántonia Shimerda, a Bohemian immigrant. As Cather herself did, ten-year-old Jim has left Virginia for Nebraska by train and is shocked by the barren prairie on his first wagon ride. Unlike Cather, Jim is an orphan joining his paternal grandparents on the Nebraska Divide.

The novel comprises five sections, called “books” by the author, and may appear at first to lack a cohesive structure. As Cather intended, there is no plot in the usual sense of the word. Instead, each book contains thematic contrasts. Book One, for example, begins with an idyllic autumn of exploration for Jim and Ántonia; it ends with a bitter winter and an unforeseen family tragedy that changes Ántonia’s life forever.

In Book Two, Jim’s family leaves the prairie for the small town of Black Hawk, where many of the young immigrant women help alleviate their families’ financial hardships by becoming the town’s “hired girls.” After Jim leaves Black Hawk to attend the University of Nebraska, he reunites with Norwegian Lena Lingard, who has become a successful dressmaker in Lincoln. He flees to Boston to avoid a lasting romance with her.
Still, Jim cannot escape his love for either Ántonia or the prairie. Similar to Cather, Jim regards the land as “the happiness and curse” of his life. While living in New York, Jim hears rumors of Ántonia’s ruin. More than fifteen years pass before he musters up enough courage to find out what really happened to her.

The novel owes its enduring appeal partly to its universal themes of time, death, youth, and friendship. Children grow up and lose their innocence; the virgin land becomes productive but fenced. Cather’s friend Edith Lewis once reflected, “The whole book was a sort of love story of the country.” The beautiful elegiac tone of My Ántonia captures the taming of the American frontier as no other work of fiction ever has. Perhaps most of all, the novel is about memory, as Jim concludes at the novel’s end: “Whatever we had missed, we possessed together the previous, the incommunicable past.”