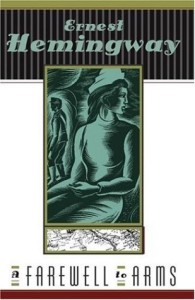 A FAREWELL TO ARMS by Ernest Hemingway

Ernest Hemingway’s third novel, A Farewell to Arms (1929), was crafted from his earliest experience with war. As a teenager just out of high school, Hemingway volunteered to fight in the First World War but was rejected because of poor eyesight. Instead, he drove a Red Cross ambulance on the Italian front, where he was wounded in 1918 by a mortar shell. While recovering in a hospital, Hemingway fell in love with Agnes von Kurowsky, a nurse seven years his senior. She did not reciprocate his passion, however, and rejected his marriage proposal five months after their first meeting.

These events were thinly fictionalized by Hemingway a decade later into A Farewell to Arms, with its tragic love story between an American ambulance driver and an English nurse. Lieutenant Frederic Henry meets Catherine Barkley in a small town near the Italian Alps. Though Catherine still mourns the death of her fiancé, killed in the war, she encourages Frederic to pursue her. Badly wounded at the front, Frederic finds himself bedridden in a Milan hospital, but Catherine arrives to look after him. It is here that their initial romance deepens into love. While Frederic recovers from surgery and prepares to return to action, Catherine discovers that she is pregnant-a surprise that delights and frightens them both. Though the couple has escaped the war, there are dangers that cannot be anticipated or avoided. The final chapter is one of the most famous, and heartbreaking, conclusions in modern literature.

This rather simple plot does not explain the appeal of A Farewell to Arms. It is Hemingway’s writing style that transforms the story into a great tragedy. The critic Malcolm Cowley considered it “one of the few great war stories in American literature; only The Red Badge of Courage and a few short pieces by Ambrose Bierce can be compared with it.” By omitting most adjectives and using short, rhythmic sentences, Hemingway tried to give the reader a sense of immediacy, of actually witnessing the events in his writing. He once described his method this way: “I always try to write on the principle of the iceberg. There is seven-eighths of it under water for every part that shows. Anything you know you can eliminate and it only strengthens your iceberg.” His spare prose and laconic dialogue made him the most widely imitated American writer of the twentieth century.