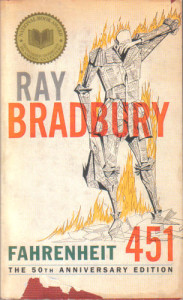 When did science fiction first cross over from genre writing to the mainstream of American literature? Almost certainly it happened on October 19, 1953, when a young Californian named Ray Bradbury published a novel with the odd title of Fahrenheit 451. In a gripping story at once disturbing and poetic, Bradbury takes the materials of pulp fiction and transforms them into a visionary parable of a society gone awry, in which firemen burn books and the state suppresses learning. Meanwhile, the citizenry sits by in a drug-induced and media-saturated indifference. More relevant than ever a half-century later, Fahrenheit 451 has achieved the rare distinction of being both a literary classic and a perennial bestseller.